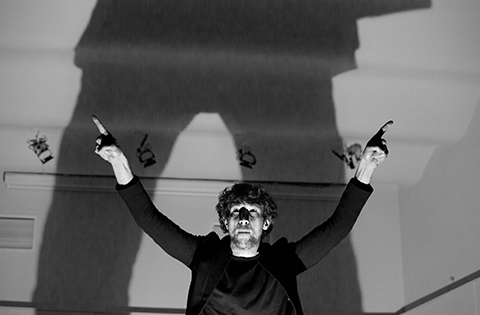 “The Songs of Maldoror” is one of the most enigmatic works of European literature. It was published in 1869 by Comte de Lautréamont, the pseudonym of Isidore Ducasse one year before he died at the age of 24. Lautréamont’s macabre hallucinations are not only populated by ghosts of all sorts inherited from Romanticism: dark characters, odd creatures, hybrid monsters, elements unleashed, they also introduce a new idea about poetic language between authenticity and artificiality, between frankness and irony. This language is a matter of special interest for the work of Meteor Group. Based on persistent and extensive work on the grammar of movement, the score of voice and the imposing images in “Maldoror” embodies Lautréamont’s anxious fantasie into a contemporary work of theatre. A new poetic theatre trying to bring the potential of the language of literary fiction beyond the machinery of conflict, catastrophe and catharsis that dramatic tradition has employed since the very beginning. A performance dashing towards Maldoror’s nightmare worlds as inversed world of pleasure.

Meteor is one of the original groups of like-minded people on Bulgaria’s independent scene. In its core are theatre author and director Ani Vaseva, philosopher Boyan Manchev and actor Leonid Yovchev. In a series of performances Meteor aims to study the possibilities of a literary or poetic theatre opposed to both stage reading and stage adaptation, and thus arrives at a very expressive physical and theatrical language. Their performances have earned wide acclaim: “A Play For You” based on a text by Ani Vaseva, “A Dying Play” based on a text by Boyan Manchev and Ani Vaseva; “ Phaethon: Freaks” by Boyan Manchev based on Ovid’ “Metamorphoses”, and others.

The performance is supported by Institut Français, Bulgaria.