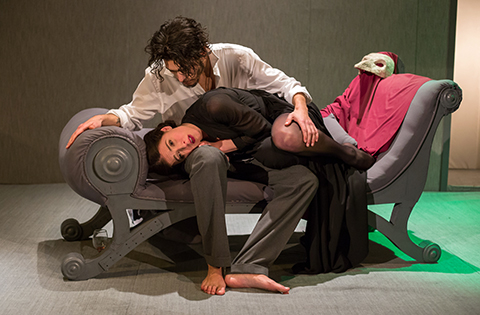 Konstantin Iliev’s play “Nirvana” has been performed on Bulgarian and international stages for more than three decades now. It is written on the basis of documentary materials and traces out the last night of two emblematic figures of Bulgarian cultural life in the 1910’s, the poet Peyo Yavorov and his wife Lora Karavelova, before two fatal shots rang out. Clinging together to one another they suffocate into the narrow space of a study where no poetry has been written for a long time. As if they talk failing to hear each other and the more they look for the other the more they get lost… But this is not merely a biographical drama. Young director Maxima Boeva takes the characters beyond their historical specifics. Following the author’s designations she seems to see the Man and the Woman in them pressured by the crisis of a hopeless love.

The performance “Nirvana” staged entirely by a young team made one of the most convincing debuts of the finishing theatre season.

Director Maxima Boeva graduated in Stage Directing under Prof. Plamen Markov at National Academy of Theatre and Film Art in 2017. She is a house director at the State Theatre in Shumen and in 2019 she presented also her first independent project “Collateral Damage” based on Svetlana Alexievich’s book on the Second World War “The Unwomanly Face of War.”

Award for best performance at the Bulgarian drama festival 2018, Shumen

Award for best directing at the National Festival for Small Theatre Forms 2018, Vratsa