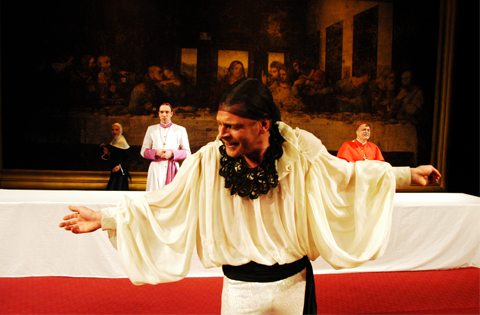 NO TRIFLING WITH LOVE

Marius Kourkinsky debuted in the beginning of the 90’s with a succession of monoperformances that brought him several awards and an extraordinary popularity. “Theatre phenomenon” is the most used definition of his unique actor’s presence. Since 1998 M. Kourkinsky works mainly as a director and his stagings have been shown on prestigious international theatre festivals like BITEF and in Moscow. Over the last years his name is constantly present in the program of ITF “Varna Summer”.

In “No Trifling with Love” M. Kourkinsky unfolds the action in front of an image of “The Last Supper” by Leonardo da Vinci, a huge empty table, and the dead glances of puppets-nuns. The romantic comedy-proverb by Alfred de Musset (1810-1857) is turned into an expressive dramatic spectacle with fascinating scenery and powerful acting in which the youngest actors of the National Theatre’s troupe also attract attention.

The relation to Musset’s time is that in our world like in his, there is no more past and the future has not come yet. Today’s man hangs in the middle of nothingness and raves that he loves. Yes, for a second he manages to love and this is the last hope alive. Do not trifle with this last hope. Do not trifle with what you are created for.
Marius Kourkinsky, director

“No Trifling with Love” undertakes an attractive play with oppositions, extremes and discrepancies: hyperbole and realism, irony and tragedy, physicality and spirituality. In short, this is theatre that speaks of the most eternal subject in most original way.”
Georgi Luibenov, www.vsekiden.com