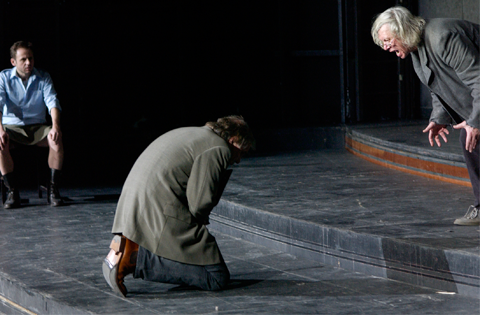 a performance of Dimiter Gotscheff, Samuel Finzi and Josef Bierbichler

Heiner Müller writes his version on Sophocle’s “Philoktet” in the German Democratic Republic at the end of the 50-ies and the beginning of the 60-ies and takes Philoktet as a model for the fatal duality of truth and lie. He revises the antic tragedy into a Lehrstück-play about the manipulation of the individual for political aims. One of the main changes in the plot that Mьller makes is eliminating the harmonic final in Sophocles’ text, achieved by “dues ex machine” and coercing his characters into solving an insoluble conflict by themselves.

Dimiter Gotscheff staged Müller’s text for the first time back in 1983 in Theatre “Sofia” and his performance entered in the history of Bulgarian theatre. Provoked by it, Heiner Müller wrote his famous letter to the director that is considered to be as important evidence of his theatre poetics as his texts for theatre. “In the physical language of your performance in Theatre “Sofia” I saw the translation of the text into theatre, the transformation of the plot from a knot of contradictions into test for the participants, the resistance of bodies against the violence of ideas, THE WORD THAT WILL BECOME DEATH.”, he writes in his letter. The performance drew the attention of German theatres to Gotscheff and he was invited to stage in Kцln and afterwards in other cities. Today Dimiter Gotscheff works mainly in Germany and is acknowledged as one of the most distinguished directors of the German speaking stage.

“Philoktet” ’s premiere was presented on the stage of Volksbühne in 2005 on the day of the 76th anniversary of Heiner Müller’s birth. It took place as honoring of the playwright’s memory. “Gotscheff is Philoktet”, declares the actor Josef Bierbichler. It is his idea for Dimiter Gotscheff to perform for the first time on stage in a remarkable trio together with Samuel Finzi, who is now one of the most popular and successful actors in German theatre, and Bierbichler himself. Severe and ascetic, very tense and intensive, the performance resembles an open rehearsal. The three actors perform as clowns and gladiators who stake and confront against each other their ideas and world outlook. This time in the program to the performance is written: “no direction”.