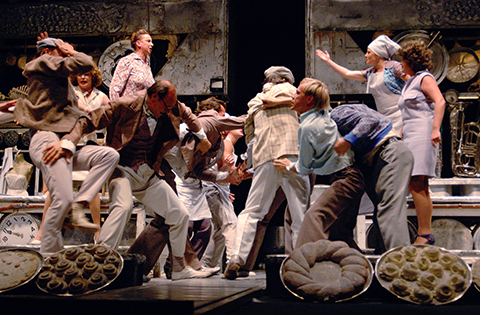 Oskaras Korsunovas (b.1969) is the most famous Lithuanian theatre director and a distinguished figure in world theatre. He was noticed at once with his first performance at the Lithuanian Music Academy and was invited to the Edinbourgh Festival where he won the Fringe First Award. It was followed by many other and in 2007 Korshunovas received the European Theatre Award “New Theatre Realities”.
His international success and numerous tourings allowed him to establish in 1999 the independent Oskaras Koršunovas Theatre (now OKT/Vilnius City Theatre). It made its place as an innovative company not only in Lithuania, but in whole Europe as well. The main ambition of OKT/ Vilnius City Theatre is the “search for modern theatre language that would correspond with the rhythm of present life; that would analyze the myth of a modern man and would provoke the audience for new possibilities of worldly behaviour”. Its repertoire stands for the principle “to stage classics as if it was modern dramaturgy and modern dramaturgy – as if it was classics”.
The performance “Romeo and Juliet” follows this principle as well. Usually the tragedy “Romeo and Juliet” is considered a romantic eulogy of love. Director Oskaras Korsunovas interprets it as a social drama. His original staging plays with popular stereotypes for the Italians. The action takes place in the daily chaos of two traditional Italian pizza bakeries.
“What interests me most in this tragedy is how love can come forward and thrive in an atmosphere of hatred or war, as in Verona.”
Oskaras Korsunovas
Co-producers: Avignon Festival (France), Hebbel Theatre (Germany), Arts and Ideas Festival (USA), THEOREM (association supported by the Culture 2000 programme of the European Union), Lithuanian Culture and Sport Supporting Foundation, Lithuanian Ministry of Culture.
The guest performance is supported by CZECH AIRLINES.