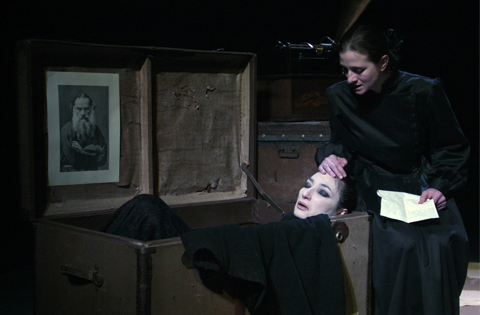 Author: A performance by Ivan Dobchev

Theatre Workshop “Sfumato” was founded in 1989 by the directors Margarita Mladenova and Ivan Dobchev as a territory for theatre research. Now it has the status of a state theatre-laboratory. Main artistic principle of both directors is the work in long-termed programs aimed to approach the poetics of a text, an author or a theme (for example Program “Radichkov”, Program “Myths” and others). Program “Exit” is the most recent project of “Sfumato” dedicated to the life philosophy and writings of two “phenomena in the Russian literature” – the writer and philosopher Leo N. Tolstoy and the poetess Marina Cvetaeva. It is realized with the artistic collaboration of the Swiss contemporary dance company “Linga” which performances have been shown twice at ITF “Varna Summer”.

STATION ASTAPOVO
The performance is created on the base of the book “Tolstoy’s flight” by Vladimir Chertkov – one of Tolstoy’s closest followers and friends, publisher and researcher of his life and writings. It describes the last days of the writer who at the age of 83, accompanied by his doctor and daughter, left Iasna Poliana to find a place where he could live according to his religious and inner beliefs. Some say that he left for Bulgaria. The last stop of his escape was “Astapovo” station where he died, The performance is based on Tolstoy’s letters, diaries and documentary recordings. On the stage can be heard also the voice of the Russian classic, recorded on a phonograph that Eddison gave him as a present in 1908.

I want to create a performance about the meaning of the escape from the trivial “values” of living – family, home coziness, formal marital love, mundane glory and “deserved rest” on the laurels of one’s past success… Tolstoy’s flight is a gesture against our civilization.
Ivan Dobchev, director

…total, subtle aggressive and distinctly sensual theatre. The spirit is above all, the values are put to an ravenous dissection.
Albena Atanassova, “Standart” Newspaper