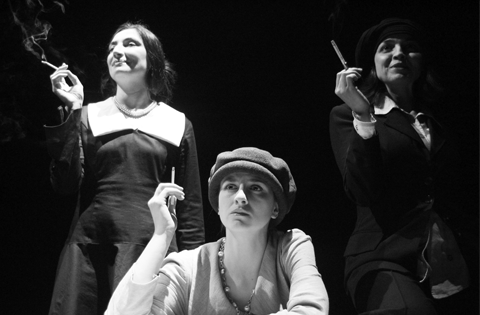 Author: A performance by Margarita Mladenova

Station “Elabuga” is the second performance in the frame of program “Exit” of the Theatre Workshop “Sfumato”.

Elabuga is the place where the Russian poetess Marina Tsvetaeva – one of the most distinguished representatives of the Silver age in the Russian poetry, put an end of her torturing life in 1941, in the height of World War II.
The performance sets off from this very moment and seeks to embrace “the burning nature” of her writings and her complicated personality on the base of her autobiographical prose, letters and poems.
A woman of a middle age carefully arranges, revises and classifies in the last day of her life its objective content. The decision has been already made, but nothing in her behavior gives any hint of it. Gradually the stage becomes inhabited with people from her “small circle”, different spaces of her life burst onto it…

The performance’s poetics seeks to relate people and things, to unite them in an overreality where intuitions for predestination recover the unity of body-word-object-sound… Our collaboration with “Linga” is a precious provocation for us – it is work with artists who reach with their bodies an extreme and moving expressions that no words could attain.
Margarina Mladenova, director

The performance overwhelms with its rhythm, with its energy and the passion, which it is being uttered with.
Anelia Yaneva, Capital light magazine