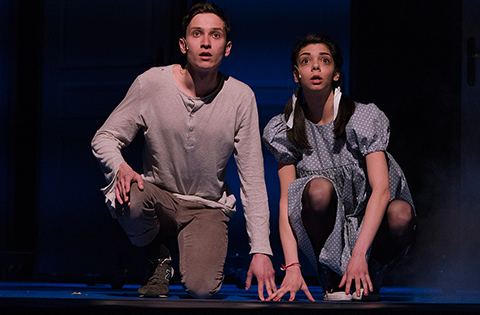 On the eve of Christmas the fairy Bérylune pays a visit to two children, Tyltyl and Mytyl. She is looking for the Blue Bird to cure her granddaughter from her strange illness: she is not happy. The children hit the road to the Blue Bird but they have to pass through the Country of Memory… On their way they meet Time, Maternal Love, Great Joys, Home Joys, Big Happinesses, Night, Light and other symbolic characters. “The Blue Bird” by Nobel prize-winner Maurice Maeterlinck is a fairy tale of two children’s voyage, a journey of innocence into the kingdom of life and death, day and night, past and future in their quest for happiness. The performance is yet another display of the best of Marius Kurkinski as a romantic director who aims to present on the stage parables with the longing to touch the inner essence and meaning of life. He refracts them into  powerful and emotional theatrical pictures.

“I dedicate this performance to those who remember their dreams. The dreams that made them love the light.  Such dreams were dreamt on Chirstmas Eve, the pure night before the birth of Christ.” Marius Kurkinski

Marius Kurkinski graduated in Acting at National Academy of Theatre and Film Arts and his one-man shows after Molière, Chekhov, the Bible and Platonov became a celebrity in Bulgarian theatre in late 1990s. In them he manifested an original, inimitable and captivating stage presence which won him the label of a “theatre phenomenon”. Kurkinski has also made movies, released music albums and for the past over 10 years has been staging Bulgarian and European drama texts as a theatre director with a distinct inclination for the modern classics. Maeterlinck is among his preferred authors: he staged “The Blue Bird” in 1998 casting students from the Theatre Academy, followed by “The Betrothal” in 2000.