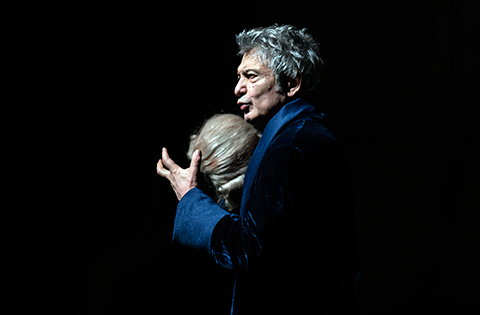 Franco-Belgian playwright, scriptwriter and novelist Eric-Emmanuel Schmitt is widely known on Bulgarian stages as a master of popular philosophical drama. This is the second staging of his 1997 play “The Libertine” at Sofia Theatre. It follows a (fictional) day in the life of 18th-century French philosopher Denis Diderot when he has to write the “Morality” article for his “Encyclopédie”.

“Philosophy claims that it explains the world; theatre claims it represents it. I combine them as a way to try to reflect the human condition on the stage, to add my personal thoughts and express my hopes and anxieties with humour and lightness as appropriate for the paradoxes of our existence” – this is how Eric-Emmanuel Schmitt describes his credo.

Director Stoyan Radev skilfully enters his exquisite and unostentatious tone. “I used to study philosophy before I graduated as stage director. Eric-Emmanuel Schmitt takes some topics that seem as if they have been resolved once and for all and begins to twist them so as to make us doubt, not in order to perplex us but to make us think deeper. To abandon pure rationality and understand that truth is grasped rather by the heart than by the mind.” Stoyan Radev