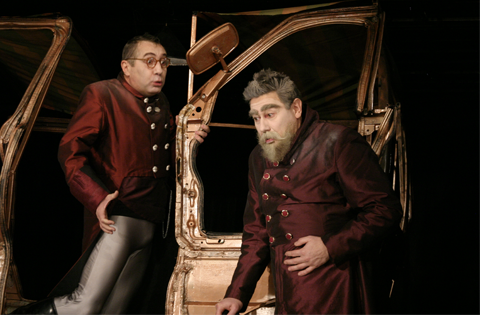 “The Merry Days” ( or “The Merry Razpliuev’s Days”) is based on the plays “Krechinskiy’s Wedding”, “The Trial” and “Tarelkin’s Death” by the Russian writer and playwright A. V. Suhovo-Kobilin written between 1852 – 1869. The trilogy portrays in a grotesque manner the corrupt mechanisms in the court and high authority institutions at the end of the 19th century, that the author himself went through, being wrongfully accused of killing his own wife. The character Razpluiev from “Krechinskiy’s wedding” has become a byword for the degradation of the Russian nobility and gentry at the end of 19th century.

Mayakovsky says that the theatre stage is not a mirror, but a magnifying glass. If that is so, then Suhovo-Kobilin’s stage is the ideal pattern for the socially engaged Stage.
Mladen Kisselov, director

The action on the stage is orchestrated perfectly by Mladen Kisselov’s measured directing… The acting is charming.
Svetla Beneva, “Leader” Magazine