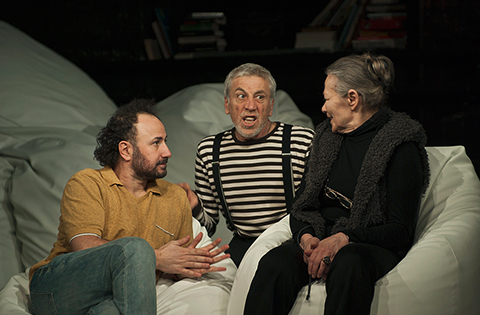 THE PEOPLE OF OZ

It seems that a famous female writer who had not published for 10 years has started to write again. Who is she to describe in her new book and who will publish it? This is the motif around which a couple of old and new love stories take place. Yana Borissova and Galin Stoev have established themselves as an inspired artistic tandem to whom, together with their favourite actors, we owe some of the top quality performances from the new Bulgarian theatre, which have also received international recognition. “The People from Oz” is the end of a trilogy that started by “A Small Play for a Childrens’ Room”, followed by “Pleasantlyscary” – both winners of the major Bulgarian theatre prizes. What they all have in common is the creation of that the intimate space, which “we need in order to be able listen to each other”. Nomination for the “Askeer” Award for best actor in supporting role – Atanas Atanassov.