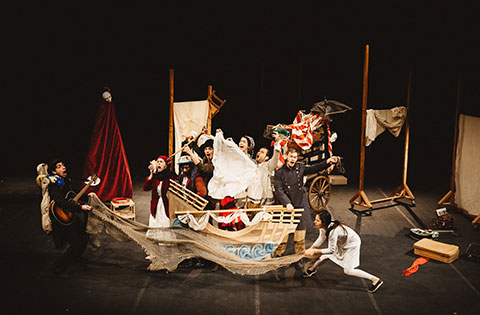 A Tragicomic Tale for the Theatre in Three Acts

Quotes from works by Federico Fellini, Emir Kusturica and Tom Stoppard  were used in the show

The performance “The Stag King” has garnered the attention of both professional and broad  audience for the creativity, enthusiasm, energy and diverse performing skills of its young team. The young directors Anastasiya Sabeva turns to the charming play by the Venetian aristocrat Count Carlo Gozzi in which he alternates realistic and fantastic improvisational scenes in the style of Commedia dell’arte following his views that the meaning of theatre is not to reflect life but to enliven the world of fantasies. A company of traveling actors appear onstage to tell in an inventive way about the fictitious city of Serendippo where a secret spell make it possible for the souls to change their bodies. The topics of love’s multiple faces, self-destructive ambition for power and the eternal quest for the true value of things sneak into these phantasmagoric motives. The result is an intriguing and genuine theatrical tale for adults in the good traditions of the playful theatre of improvisation.