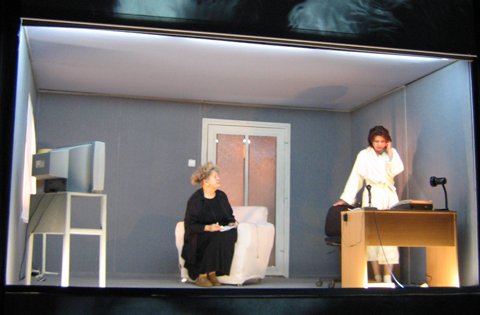 THE VOICES OF THE OTHERS

Plamen Doinov is one of the most prominent contemporary Bulgarian critics, poets and playwrights. His plays “A good woman in a bad winter”, “Iwan’s house” ( winner of the Play Award “Iwan Radoev”2001), “Zhana and Alexander, or Don Juan in an old people’s home” (nomination for “Askeer” 2003) have been successfully staged. “The Voices of the Others” is his newest play. It is encouraged at the Festival “New Bulgarian Drama” – Shumen 2004 and has got another nomination for “Askeer” 2006.

The staging is by Plamen Markov – one of the established Bulgarian directors, professor of Acting and Directing at the National Academy for Theatre and Film Arts. Minimalistic and combining the stage action with short video scenes, the performance creates a panorama of everyday stories on the borderline between farce and drama.
Nomination Askeer 2006 for Best actress in a supporting role (Tatiana Lolova)

At least once in life every person falls into a situation of how to overcome, how to deal with one’s sometimes creepy, poor or simply mediocrative existence… And before you realize, somebody else starts to live your life, or to speak through you and you take the words of the others for your own.

“The Voices of the Others” is a contemporary Bulgarian play in the full sense of the word… An excellent author’s find of interesting characters and stories – a mosaic of many destinies and different approaches to their portraying.