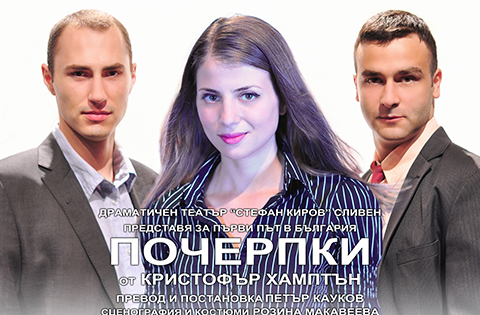 translated and directed by Petar Kaukov

Christopher Hampton is a British playwright, screenwriter and film director. He gained world-wide fame by his film adaptation (Dangerous Liaisons) of the novel Les liaisons dangereuses (1988 Academy Award). He earned an Academy Award nomination for his film adaptation of Ian McEwan’s novel Atonement. He wrote the play “Treats” in 1975 and updated it in 2006. In it he explores the human ability to make fateful decisions in the field of emotional commitment and erotic attraction, which has not changed and will probably never change. The comedy unravels the ménage à trois involving Ann, her former boyfriend Dave, and her lover Patrick. Ann and Patrick are contentedly sitting at home, talking, when suddenly Dave breaks in…