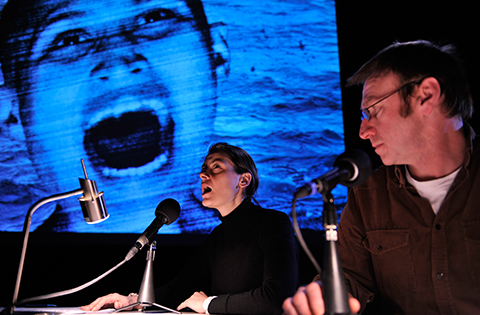 “Void Story” was made for SPILL Festival 2009, London with support from Tanzquartier, Vienna and Tate Media “Void Story” follows a beleaguered pair of protagonists on a rollercoaster ride through the decimated remains of contemporary culture. Navigating one terrible cityscape after another, mugged, shot at and bitten by insects, pursued through subterranean tunnel systems, stowed away in refrigerated transport, shacked up in haunted hotels and lost in wildernesses, backstreets and bewildering funfairs, they travel to the centre of a night so intense that there are no stars to be seen. Forced Entertainment perform the bleak and comical contemporary fable of Void Story in an unique combination of theatre, film and radio play. The performers are sitting at tables, turning the pages of the script, ‘doing’ the requisite voices and adding in sound effects for gunshots, rain and bad phone-lines. Simultaneously the otherwise empty stage is dominated by a series of projected images, a storyboard for an impossible movie-version of Tim Etchells’ uniquely unsettling text. Somewhere between the live dialogue, the recorded sound effects and the collaged images attempting to visualise the narrative, is where Void Story actually takes place. Since forming the company in 1984, the six core members of Forced Entertainment have sustained a unique artistic partnership for quarter of a century, confirming their position as trailblazers in contemporary theatre. Forced Entertainment’s trademark collaborative process – devising work as a group through improvisation, experimentation and debate – has made them pioneers of British avant-garde theatre and earned them an international reputation. “Britain’s most brilliant experimental theatre company” writes “The Guardian”. The guest performance is realized in partnership with British Council. In English with Bulgarian surtitles. Contacts: Forced Entertainment The Workstation, 15 Paternoster Row, Sheffield, S1 2BX, UK fe@forcedentertainment.com; www.forcedentertainment.com @ForcedEnts #voidstory