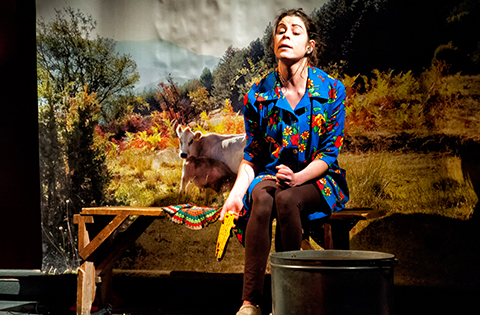 Vox Populi is a studio for documentary theatre established one year ago that has made a name for an original company, dealing with the genre of the so-called “verbatim” theatre. “Verbatim” (Latin for “word for word”), i.e. the performances are based on documentary materials collected in the form of interviews and on stage reproductions of their expression and form. Yatse Forkash (meaning “in a great hurry” in the dialect of the Rhodopes) is a performance built on interviews, stories and songs collected by the team during a field trip in the Rhodope Mountains in the summer of 2012. A stage account of vanishing things: genuine folklore, ancestral memory, rural life and the modern man’s connection to their roots. The production is on tour with the support of Art in Motion Programme initiated by Art Office Foundation and America for Bulgaria Foundation “Ikar” Award of the Union of Bulgarian Actors for best text for theatre.