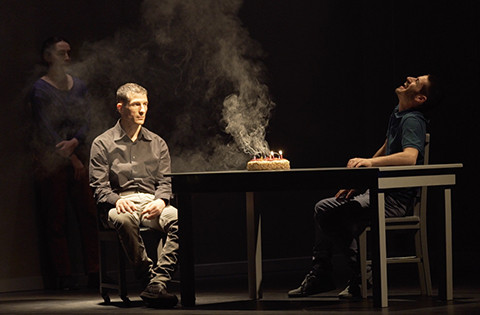 Emotional dance theatre about the constant quest for happiness.

“Dandelion” mixes imagery and physicality in order to explore our constant human quest for joy, liberation, ease and happiness. It reveals stories about our anxiety to change, our fear to leap into the unknown and our trepidation to exist in a changing world where human connection becomes more and more elusive. This creation is the first joint work of established artists Hannes Langolf and Ermira Goro who performed for 9 years with the world renowned company “DV8 Physical Theatre”. Their shared passion is to create work that sits in the subtle space between reality and metaphor, closely connected to life and its stories.

“With “Dandelion” we want to dive into the inner world of our human obstacles and inhibitions and find a way to reveal the joy of stepping over our own thresholds. We very much saw this project as a devised piece, drawing from the stories of our performers and ourselves… We talked a lot about how an honest relationship with the people around us can make us go beyond our own insecurities and obstacles and make us a fuller version of ourselves.” Hannes Langolf & Ermira Goro

Hannes Langolf is a dance and theatre artist living in London. His artistic path has lead him to learn, work and collaborate with artists and companies like William Forsythe, Angelin Preljocaj, Wayne McGregor, Akram Khan and Punchdrunk to name a few. From 2007–2016 he was part of the world-renowned DV8 Physical Theatre. He became DV8’s Creative Associate from 2014-2016 and played the title role in their production “John”. As choreographer he has created work for Munich Dance Festival and more recently the Susanne Linke Dance Company among others. In 2015, Hannes was nominated as one of the 100 most influential and innovative people working across Britain’s creative industries.

Ermira Goro is a movement, dance theatre artist from Greece. She has been part of DV8 Physical Theatre from 2007 – 2016. As a choreographer, Ermira presented her work internationally at various venues such as Judson Church, Joyce Soho and Danspace Project in New York, Dock11 Theatre in Berlin, Athens & Epidaurus Festival among others.

World Theatre in Sofia is part of the Calendar of Cultural Events of Sofia Municipality.

The guest-performance is supported by Onassis STEGI.