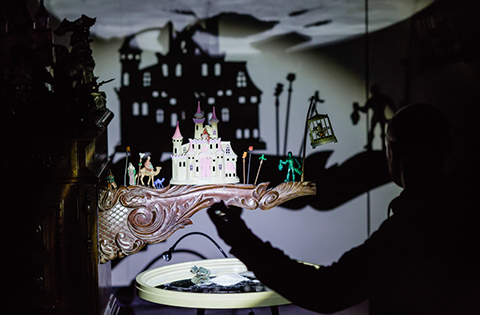 Is it possible to play “The Tragedy of Hamlet”, “Macbeth”, “Othello”, “King Lear”, “Romeo and Juliet”, “Antony and Cleopatra”, “The Tempest”, “The Life of Henry the Fifth”, “Richard III”, “As You Like It” and “A Midsummer Night’s Dream” in one show? How can the theatrical imagination go beyond all limits and unleash spectacularly, sensationally, and stunningly as it is expected from it? The Catalonian theatre maker David Espinosa together with his team want to review some of the plays by William Shakespeare for which he is considered to be the best playwright of all times and to assemble them under the meaningful title of his popular comedy “Much Ado About Nothing”. Using the Elizabethan texts as a starting point, they end up making their own version with scenes, texts and choreographies articulated on stage by a huge number of miniature figures instead of actors, manipulated only by one real performer. For this purpose, they use an old piece of furniture as a sculpture made by hundreds of toys and ornaments in various shapes and sizes. In an impressive game of shadows and lights, they become alive in front of the spectators with the breathtaking opera music by Richard Wagner on the background. “Much Ado About Nothing” is a journey beyond the limits of imagination with a lot sense of humor, irony and free play with traditional theatre conventions and expectations to the theatre experience. In the year of the 400th anniversary of William Shakespeare’s death the performance brings his work closer to the audience in an untraditional and fresh way.

David Espinosa studied acting in Valencia and parallel to that he did training in Contemporary Dance, Improvisation and Capoeira in Valencia, Brussels and Barcelona. His career started as a performer in various theatre and dance companies. In 2006 he founded together with Africa Navarro El Local Espacio de Creacion, with which he created his last shows. They have been presented at prestigious international forums such as Biennal de Venezia, the International Festivals NET Moscow, Mime Festival London a.o.

The show is played in English with translation into Bulgarian.

See ‘Much Ado About Nothing’ at International Theatre Festival ‘Varna Summer’.

The guest-performance is supported by the Embassy of Spain in Sofia and Instituto Cervantes in Sofia.