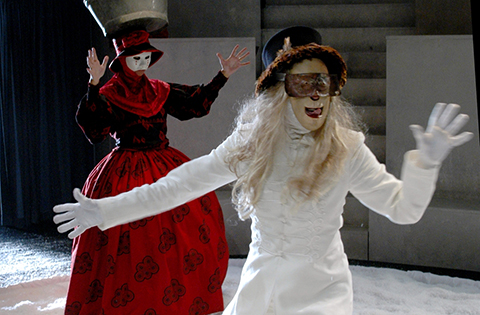 The performance “Andersen’s Dream” (2004) by one of the most significant theatre laboratories in the world, Odin teatret, is based on Hans Christian Andersen’s fairy tales and actors’ improvisation. By using a variety of means combining physical, puppet and visual theatre it unfolds as a kaleidoscope of fantasy, as a combination of real-life events and fantastic motifs resembling a dream invading the consciousness of the legendary Danish singer, dancer and writer.

A circle of artists gathers in a garden in Denmark. It is a bright morning. They wait for a summer night when the setting sun will dance. A friend from another continent is about to join them. With him, dreaming with open eyes, they will depart on a pilgrimage into the regions of Andersen’s fairy tales. Europe is at peace, or at least their country is. It is summer, yet snow falls, and the snow becomes tainted with black. Their fantasies sail on a tenebrous dream: a vessel that transports men and women in chains. The artist feel the weight of invisible chains. Are they too enslaved? When the pilgrimage is about to end, the open-eyed dreamers become aware that their summer’s day has lasted a lifetime. The bed of dreamless sleep awaits them. Figures are coming to take them. Are they ghosts, puppets or toys? What kind of life do we live, when we stop dreaming?

The performance presents one of the great theatre figures of the 20th century: Eugenio Barba. He was born in Italy but since 1966 he has been based on Denmark where is manages Odin teatret which he founded and the International School of Theatre Anthropology in Holstebro. His achievements are studying non-European forms of theatre, mostly from India and Japan, and matching contemporary and ancient theatrical techniques from different cultures. In addition to staging and teaching Eugenio Barba is also author of texts on the methodology of anthropological theatre, member of the editorial boars of some leading specialized editions, holder of honorary doctorates from a number of universities all over the world, winner of the Pirandello International Theatre Award  and the Thalia Prize of the International Association of Theatre Critics. “Andersen’s Dream” has been presented at a number of prestigious theatre festivals in Europe and South America.