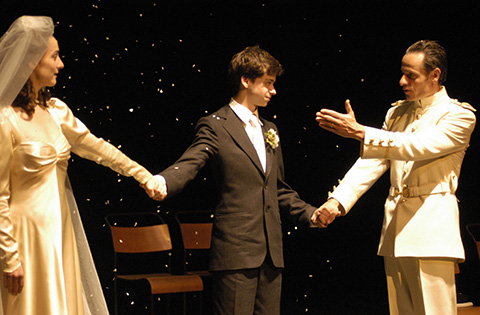 Declan Donnellan is an emblematic figure in the world theatre of the last decades. He works for the most prestigious theatre and festival stages around the globe. Together with designer Nick Ormerod he found the theatre company Cheek by Jowl in 1981 to develop their own theatrical method. Donnellan’s book The Actor and the Target is published in several languages. He has received awards in London, New York, Moscow and Paris, including the Laurence Olivier award for Outstanding Achievement and is also Chevalier de l’Ordre des Arts et des Lettres.

Andromaque is created for Theatre des Bouffes du Nord whose artistic director is Peter Brook. In Donnellan’s distinctive directorial style the scenic action is concentrated through the intense presence of the actors and the investigation in the inner life of Racine’s personages. In the startling myth of Andromaque, Donnelan places at the heart of the tragedy the young Astyanax – Andromaque’s son.

“Andromaque” is a story about parents and children… How can the young possibly measure up to such immortal stars as Achilles, Agamemnon, Clytemnestra, Hector and Helen?! Obsessed with the memory their parents, they ignore the fate of their own child Astyanax… Racine’s sharp, modern analysis of the human psyche illustrates perfectly the old adage that “the heart is a treacherous place”.
Declan Donnellan