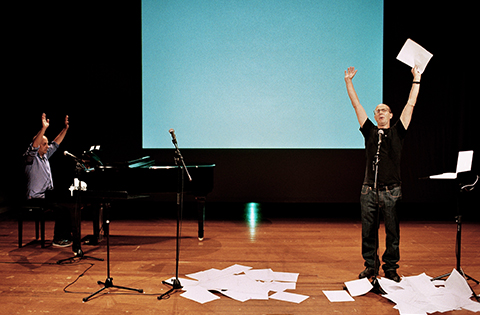 CHEAP LECTURE AND – THE COW PIECE

Choreographer Jonathan Burrows and composer Matteo Fargion describe what they do as ‘handmade and human- scale’. Over the past ten years the two artists have built a body of duets which juxtapose the formality of music composition with a radical and open approach to performance and audiences. Cheap Lecture and The Cow Piece are conversations with the structure of John Cage’s Lecture On Nothing (this year the world celebrates 100 years of his birth and the 20th anniversary of his the death ), at once a homage to and questioning of a way of thinking that has underpinned so much dance and performance in the last thirty years. “The simplicity of means in Burrows and Fargion’s work and the sheer fun that pervades it seduce you into loving it.”, writes the New York critic Toby Tobias.

The guest performance is supported by British Council Bulgaria