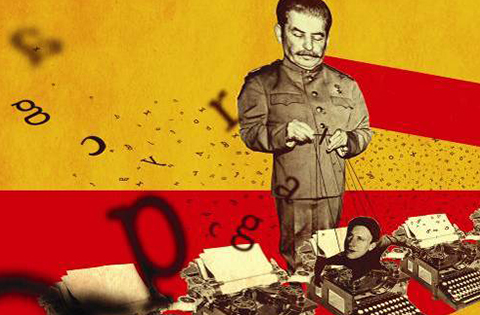 National Theatre Live is an exciting initiative to broadcast live performances of the best of British theatre to over 200 cinemas in more than 22 countries. The first premiere of the National Theatre in London to be shown over satellite in the frame of World Theatre in Sofia and in collaboration with British Council is “Collaborators” – a new play by John Hodge, the screenwriter of cutting edge movies like “Trainspotting”, “The Beach”, “Shallow Grave” a.o. Moscow, 1938.

A dangerous place to have a sense of humour; even more so a sense of freedom. Mikhail Bulgakov, living among dissidents, stalked by secret police, has both. And then he’s offered a poisoned chalice: a commission to write a play about Stalin to celebrate his sixtieth birthday. Inspired by historical fact, `Collaborators` embarks on a surreal journey into the fevered imagination of the writer as he loses himself in a macabre and disturbingly funny relationship with the omnipotent subject of his drama. John Hodge’s blistering new play depicts a lethal game of cat and mouse through which the appalling compromises and humiliations inflicted on any artist by those with power are held up to scrutiny. Alex Jennings (The Habit of Art) plays Bulgakov and Simon Russell Beale (London Assurance), Stalin. Just like in the theatre houses, during the intermission the audience can leave the hall, but they can also choose to stay and watch interviews with the creative team of the performance. Unlike the movies in the cinemas however the theatre performance is to be broadcasted only once.

The live broadcast of National Theatre performances is a part of the global programme NT Live which is realised in Bulgaria thanks to the partnership between British Council Bulgaria, Cinema City, World Theatre in Sofia Programme of the International Theatre Festival Varna Summer, Sofia Municipality and with the media collaboration with Fresh Radio and Programata Cultural Guide.