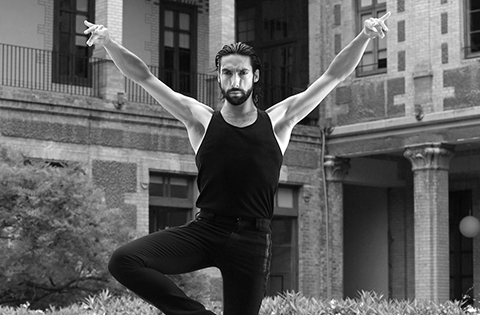 “Desplante” is an intimate, dramatic and intriguing flamenco performance combining different types of the traditional Spanish dance in the masterful performance of one of the new stars on the flamenco stage: Eduardo Guerrero. Desplante is one of the numerous types of llamada in flamenco: a sign given by the dancer to the singer and the guitarist for a coming change of rhythm. With his vivid individual style and intense presence, Guerrero brings out the essence of flamenco and lends it a contemporary form. He is accompanied by Manuel Sote’s flawless voice and the beautiful sound of Javier Ibáñez’s guitar, thus creating a real pleasure for the senses. By “Desplante” Eduardo Guerrero shows the essence of flamenco with new power and improved style contributing to the development of this dance that was declared as Intangible Cultural Heritage by UNESCO.

Eduardo Guerrero has been dancing since the age of six at Carmen Guerrero’s dance school in Cadiz. He continued learning with such masters as Antonio Canales, Manolo Marín, Mario Maya or Chiqui de Jerez. He studied Spanish dance at Cadiz Dance Conservatory, to later deepen his knowledge of contemporary dance (under David Greenall), and about classical dance (under Montserrat Marín).. Since 2002, he has played in performances of major choreographers and performers in Spain such as Antonio Canales, Eva Yerbabuena, Aida Gomez a.o. Eduardo Guerrero has developed expressive and intense personal style of performance distinguished with a number of awards. He performs at leading stages in Spain and around the world, including Bolshoi Theatre in Moscow. Guggenheim Museum in New York etc.