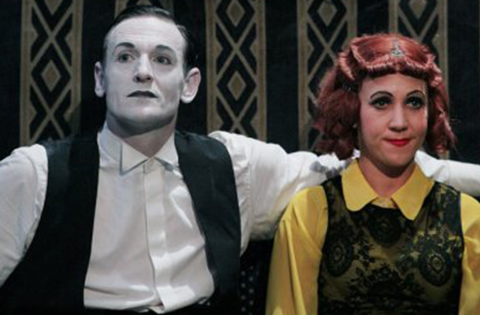 The critically acclaimed theatre maker Jakop Ahlbom has worked for years on his own unique theatrical trademark where theatre, mime and dance come together as one. He uses the range of illusionism, acrobatics, dance, slapstick, music, and visual arts in order to create a world of fantasy, in which anything can happen. His award winning performance “Lebensraum” brings the magic of silent pictures to the theatre stage captivating the audience by their absurdist humour, fantastic acrobatics and technically challenging acting. The performance is inspired by the works of the actor and filmmaker Buster Keaton, a pioneer in the silent movies` worlds of slapstick and physical comedy. Two men live together in a tiny room. Ingenious they are, the lack of space is not an issue. Everything has multiple functions: the bed operates as a piano and the bookcase serves as a fridge. To compensate the absence of a woman, the two create a mechanic cleaning lady. But soon they’ll figure out that this lady is a doll with an opinion. Tensions are arising, and the room gets smaller and smaller… More info: www.jakopahlbom.nl VSCD Mime Prize 2012 “Wijkjury” first prize of the audience in Utrecht “Delftse Kijker” prize “Toneelkijkerprijs” in The Hague Silke Hundertmark is nominated for the Colombina prize for best supporting female role.