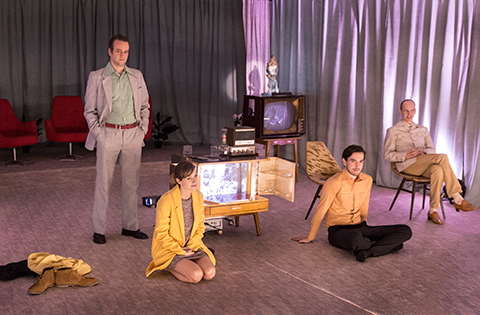 An informant for the secret police is most often not what one chooses to become, but it can be considered the second worst option in a system that keeps tabs on a huge number of people – even the loyal, the remotely suspicious or uninfluential – and knows their secrets and vulnerabilities. Everybody has something to hide. To be successful in operative work, an informant has to ease into and stay credible in different roles. He or she should not raise suspicion in his or her private life, should gain the trust of the subject and show absolute loyalty to his or her handler.

This story is set in Hungary in the 1960’s. The secret police has Michael Besenczy under surveillance. Besenczy is Hungarian but has been living in England since his childhood. As a young man he came back to his home country to study film directing at the University of Theatre and Film Arts. The Hungarian authorities suspect he is working with British intelligence. Informants placed around him are commissioned to form intimate friendships, erotic relationships with the subject in order to learn as much as possible about him in order to provide privileged information. But no matter how skilful and cautious these informants are, they cannot hide from the secret police’s and each other’s observant gaze. In the end they might find themselves vulnerable, suddenly recognizing their own deepest fears in the eyes of their subject.

Kristóf Kelemen is a young director and playwright based in Budapest, whose documentary theatre productions received critical acclaim and were invited to a number of Hungarian and international venues and festivals, including Temps D’Image Cluj, TESZT, Off Europa, Theaterfestival Basel, BOZAR and Divadelna Nitra. Kelemen graduated as a dramaturge at the University of Theatre and Film Arts in Budapest. He is a dramaturge at the Radnóti Miklós Theatre and also works on independent projects. Observers is Kelemen’s third production for Trafó House of Contemporary Arts. The starting point is a true story documented in the reports of informants to the Hungarian secret police. Kelemen was awarded the Hungarian Contemporary Drama Prize and Observers was chosen as best new Hungarian drama at the 2019 Hungarian Theatre Critics’ Award where the production was named best independent production.

The presentation of the production is supported by the Hungarian Cultural Institute in Sofia: