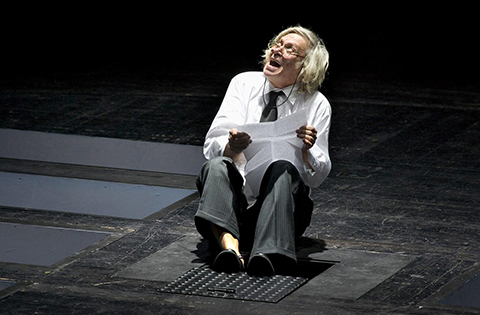 Director Dimiter Gotscheff’s connection with the person and the texts of German playwright Heiner Müller is legendary. It started in the 1960s when Gotscheff was assistant to the great director Benno Besson in Germany. He also chose Müller’s text “Die Weiberkomödie” (“Women’s Comedy”) for his directorial debut in 1977 in Nordhausen. His performance based on Müller’s “Philoctetes” at Sofia Theatre in 1982 is among the great events in Bulgarian theatre for the past decades. It became the occasion for Heiner Müller’s celebrated “Letter to the Bulgarian Director of ‘Philoctetes’” in which he writes that he sees how his play achieves its full effect through actors’ radical body language. The performance became the occasion for Dimiter Gotscheff to be invited in 1985 to stage performances in the former West Germany and gradually he became one of the most important European directors. He repeatedly revisited Müller’s texts intertwining quotations from them into a variety of his performances and staging many of his plays. In 2007, Dimiter Gotscheff also realized “The Hamletmachine” at Deutsches Theater by acting as Hamlet himself. The performance gained significance as a very personal gesture, as a landmark stage encounter between two great theatre figures in dialogue with the big History.

Written in 1977, “The Hamletmachine” is the result of Heiner Müller’s decades-long involvement with Shakespeare’s works. While he was in the process of translating “Hamlet” for a Deutsches Theater production by Benno Besson, Müller also wrote this strange and puzzling play. Hamletmachine borrows characters and key scenes from Shakespeare’s drama, but has almost no storyline or dialogue. In five acts, which different in their forms, characters – including Ophelia and Hamlet, or an actor playing Hamlet – appear as the ghostly revenants of real, historical figures. Diverse and opposing collective experiences collide in the play, which includes many references to events in European history and to the history of Communism after the Second World War.

In 2013 in Berlin, the theatre world tool a last farewell of Dimiter Gotscheff (born in 1943 in Parvomay). Since the mid 1980s he worked mainly in German-language theatre and his performances were regularly selected into the main selection of the Berliner Theatertreffen Festival: among them are “Black Battles with Dogs” by Bernard-Marie Koltès, “Ivanov” by A. Chekhov, which were also shown in Bulgaria. Together with his actors Samuel Finzi, Wolfram Koch and Almut Zilcher, Dimiter Gotscheff is the winner of the 2011 Berlin Theatre Award, handed out by the Preussische Seehandlung Foundation in recognition of “outstanding contributions to German-language theatre.”