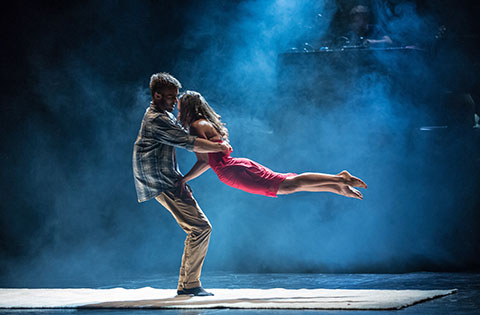 Spectacular acrobatic numbers, humour and captivating artistry in a show by one of the leading Czech companies in contemporary circus art.

“The Loser(s)” manifests the new face of contemporary circus in the Czech Republic. It’s a  spectacular performance that brings together dance, acrobatics, and circus techniques. The show was initiated by the acrobat duo DaeMen, the new talents who became TV stars in the Czech Republic and Slovakia. It deals with the fear of failure in contemporary dynamic societies where many people feel they are facing the danger of losing their identity or abandon ideas they used to have about their personal lives.

“Life brings us many losses and failures. People fail even in love. The road is thorny but there is a ray of hope of love and happiness in the end.” A performance that both inspires respect for performers’ physical abilities and is emotionally captivating, thanks also to the live music set by the famous Czech DJ En.dru.

The guest-performance is supported by Czech Center in Sofia and by Ministry of Culture of  Czech Republic.