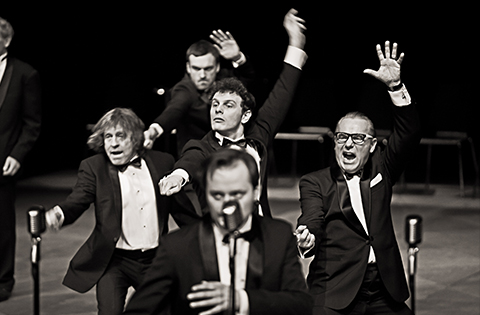 Twelve Angry Men’ is the title of the cult 1957 film by Sidney Lumet based on a TV play written by US author Reginald Rose. Twelve men meet to decide on the fate of a teenager charged with murder. The movie demonstrates how after a heated debate the jurors overcome their own prejudices, elude the traps of the mendacious system and issue a just, impartial verdict. Democracy, truth and beauty triumph. The artistic team of the theatrical version of ‘Twelve Angry Men’ doubts, however, this triumph. They create a spectacle in which good and evil are merely tools of manipulation, while the concept of cause is driven by the desire to win acclaim, rather than serve the truth. The tendentiously spoken language is not so much about reaching agreement for a common idea but about unearthing private traumas, ambitions, complexes and desires. The director Radosław Rychcik is among the young hopes of contemporary Polish theatre. A spectacular and intelligent staging which hasn’t stopped drawing attention since its premiere in the city of Poznan.