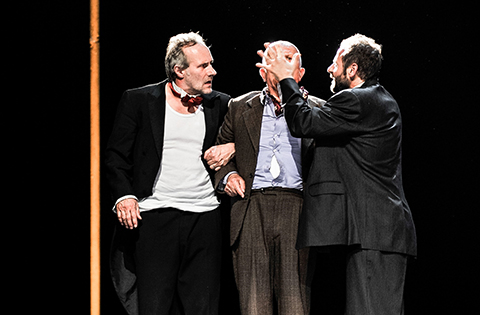 A co-production of Deutsches Theater Berlin and Ruhrfestspiele Recklinghausen

A country road. A tree. Evening. Two acts, two times two people: Vladimir and Estragon, Pozzo and Lucky. Sometimes a boy passes by. Nothing happens. And there is – as the first line of Beckett’s text states, “nothing to be done”. What remains is waiting. And talking. As if there were no other way of reassuring oneself of one’s own existence. As if the repetitive rituals of talking served the purpose of making the world and the mere passing of time more bearable. Playing with words. Saving oneself.

The Bulgarian director Dimiter Gotscheff (1943 – 2013), who lived and worked in Germany permanently since mid-1980s, started the preliminary work on the staging of this emblematic play of the theatre of absurd at Deutsches Theater Berlin. However, his life ended before he could finish it. Gotscheff made his mark on European theatre with his unique mix of laconicism, humour, poetry and inscrutability. The actors Worlfram Koch and Samuel Finzi as well as the director Ivan Panteleev were among the closest theatre accomplices of Gotscheff in Germany and he created some of his best performances with them. It was the wish of his actors, in particular, to bring this production to the stage: as an affectionate homage. It gained high acclaim both by the audiences and be the critics distinguishing the virtuosity, the extraordinary energy and creativity in Koch’s and Finzi’s acting. For their roles of Estragon and Vladimir they received the prestigious theatre award Gertrud-Eysoldt-Ring 2015 and the performance was selected for the Berlin Theatertreffen 2015 as one of the ten most remarkable productions of the season.

Ivan Panteleev studied Theatre directing at the National Academy for Theatre and Film Arts in Sofia. He staged texts by Anton Chekhov, James Joyce, Luigi Pirandello, Johann Wolfgang von Goethe, Heiner Müller und Irvine Welsh in Sofia, Avignon, Riga und Stockholm. From 1998–99 he was a fellowship-holder at the Akademie Schloss Solitude in Stuttgart. He directed works at the Staatstheater Stuttgart, the Schauspielhaus Zurich and at the Luzerner Theater. In Berlin he has staged in two of the biggest and prestigious theatre houses Deutsches Theater Berlin and Volksbühne. Panteleev is the author and director of the documentary film “Homo ludens” (2008) about the director Dimiter Gotscheff. Since 2010 he has been visiting professor for theatre direction at the Ernst Busch Academy of Dramatic Arts in Berlin.

Samuel Finzi studied acting at the State Academy for Theatre and Film in Sofia, and began acting in Germany at the beginning of the 1990s. A close working relationship developed between him and the director Dimiter Gotscheff. From 2003–2005 he was engaged at the Volksbühne am Rosa-Luxemburg-Platz. Since 2006 he has been at the Deutsches Theater Berlin. He has also worked with some of the most distinguished directors in the German speaking and European theatre such as Benno Besson, Jürgen Gosch, Robert Wilson, Frank Castorf, Johan Simons a.o. He was chosen as Actor of the Year 2015 by the “Theater heute” Magazine for his role as Wladimir in “Waiting for Godot”.

In German with Bulgarian and English subtitles.

The production is presented with the support of Theatre Spaces Goethe-Institut.