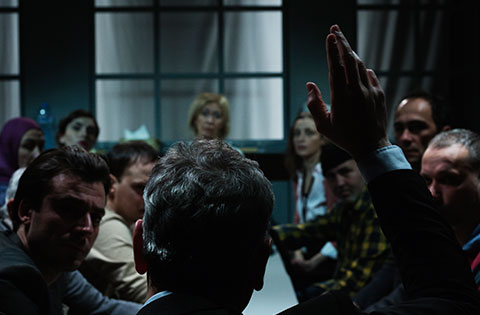 The end of a trial. Twelve jurors have gathered to decide the fate of an 18-year-old boy accused of first degree murder. All jurors are convinced he is guilty. All but one. Will they manage to impartially decide whether he is guilty or not guilty? Will they manage to overcome all of their prejudices? Their own past? If all vote “guilty” there is only one punishment: a life sentence.

The performance is based on the famous play “Twelve Angry Men” by US author Reginald Rose, which was first written for TV in 1954. Director Sidney Lumet’s film version of 1957 starring Henry Fonda was nominated for Academy Awards in the categories Best Picture, Best Director and Best Writing of Adapted Screenplay.

In his new performance Prof. Plamen Markov breaks the taboos and goes outside the established formula of 12 male jurors by introducing for the first time some female characters. By doing so he achieves an even more effective, complex and reliable picture of social attitudes and portraits presented by string acting presences.

“…what most powerfully “sucks in” the spectator into the whirlpool of this performance is actors.” (Portal Kultura)