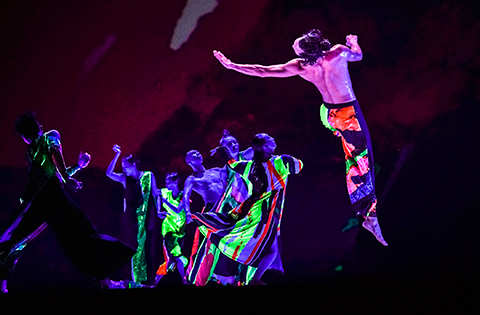 In fine and visual performances, the Cloud Gate Dance Theater harmoniously combines the Asian tradition with contemporary dance. “13 Tongues” is of its newest productions and it presents the company for the first time in Bulgaria. The dance piece is inspired by stories about “Thirteen Tongues”, a street artist in the 1960s. This legendary story-teller was said of being able to portray multiple roles of all walks of life in Bangka, the oldest district in Taipei city, rich with temples, religious rites, and festive parades. In “13 Tongues”, CHENG transforms the memories of the Taoist rites and bustling street life of Bangka into a fantasy world.

The metallic sound of a hand bell unfolds the soundscape that fuses Taiwanese folk songs, Japanese nakashi tunes and electronic music. Against a bizarre projection reminiscent of colors of temples, dancers move in grounded positions, traveling in serpentine patterns. They chant mysterious mantras, stomp, stagger and tremble like enchanted shamans, until the light dims down and glaring fluorescent patterns on their costumes flow through the space, as if thousands of wandering spirits from the old Bangka were evoked. A Goddess floats up and flies over the head of black-clad celebrants. A koi fish appears in the projection, wiggling its tail, and disappears into nowhere…. “13 Tongues” takes audience on a journey as mesmerizing as the stories told by Thirteen Tongues, where lines between spheres of deities, spirits and human beings are subtly dissolved.

13 Tongues is a sensationally big, indulgent and visually arresting expression of cultural memory. The Times

The Cloud Gate Dance Theater in Taiwan is a world-famous emblem of contemporary dance in Asia. In 2020, CHENG Tsung Lung succeeded the legendary founder of the company LIN Hwai-min as artistic director.

CHENG took his first dance class at the age of 8. Upon graduation from the Dance Department, Taipei National University of the Arts, he joined Cloud Gate in 2002 and became the Artistic Director of Cloud Gate 2 in 2014. He had won top prizes in international choreography competitions, including the Premio Roma Danza International Choreography Competition, and became widely known in the dance world for breathtaking works inspired by the street life and folk religion that was part of his upbringing in the oldest commercial district of Taipei. CHENG’s works exude a humble beauty rooted in Asian culture. His 13 Tongues (2016), incorporating folk steps, religious rites and Taoist chanting into a contemporary expression, has received raving reviews from France, Germany, and China. French media credited it as “a triumph… appealing to the eyes.”

Accessible for 72 hours from 30 November  7 pm till 3 December 7 pm only in Bulgaria.