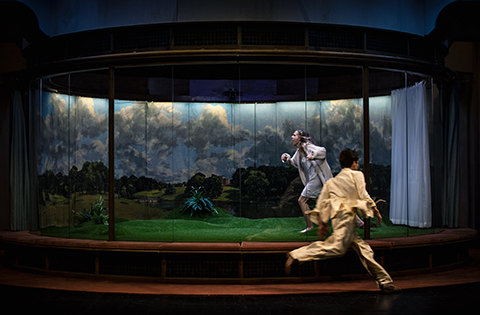 The film “14 Minutes d’Inconstance” was created especially on the occasion of the digital edition of Varna Summer International Theater Festival.

How could the theatrical experience be shared on screen? How to capture the emotion of the performance without being in the theatre hall? Obstructed by the circumstances of performing on stage, how could we keep the feeling?

We invite you into the world of the characters of the dark and sensual comedy “The Double Inconstancy” by Marivaux. This is a world in which political strategies are placed in the field of feelings.

“The Double Inconstancy” is the latest performance by Galin Stoev, which premiered in November 2019 at ThéâtredelaCité in Toulouse, of which he is currently a director. In it he offers a contemporary reading of Pierre de Marivaux’s classic comedy of 1723.

Harlequin and Sylvia are stubbornly in love. Which is quite a problem for the Prince, himself in love with Sylvia, since he is not allowed to use force to break up their couple. Then again, some forms of violence can be insidiously gentle… Director Stoev sees the lovers’ bond “as a white mouse” that is to be experimented upon until the desired result is achieved by those who run the lab. He excels at staging the disquieting charm of one of France’s most celebrated and subtle playwrights, whom he considers as “a precursor of our post-truth days” : what is true, what is false indeed, if true love, this most « sincere » and « natural » of feelings, falls for such traps?

Nomination of the Award of French theatre critics 2020 for performance of the year, for best stage design (Alban Ho Van’s), for a Theatre Revelation of the Year (for Maud Gripon and Thibaut Prigent) and for best actress (Melodie Richard).

In French with Bulgarian subtitles.