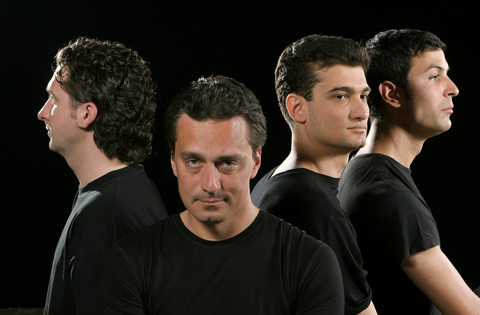 Andrey Batashov is one of the most famous Bulgarian actors. Having realized numerous roles on the stage of the National Theatre, he has gained a broad popularity with his blockbuster mono performances after texts by Erik Bogosyan. “Sex, Drugs and Rock’roll”, directed by Snezhina Tankovska, has already been played fifteen years in Theatre 199, “Sexxx” has been already three years in the program of NDT “Salza i Smyah”. There his first theatre concert “Rhythm” is still attracting the audience. Its score is built on different ways of creating rhythm – from the drums on the stage to clicking with a pen and the sound of rubbing sheets of paper, combined with poetic texts and sensual choreography. The performance is being presented more than 7 years and has toured on many national and international stages.

The theatre concert 360° develops the idea and the aesthetics of “Rhythm” and counts mainly on the expressive rhythm of the drums that the actors beat on the stage, on the impact of live music and movement. Composer of the rhythms is the musician of the popular Bulgarian band FSB and other pop, rock and jazz formations Ivan Lechev. The performance is inspired by the figure of the circle – its mystery, beauty and perfection. The result is an attractive and exciting theatre concert that promises to turn the audience to 360 grades.

“We dance round in a ring and suppose,
But the Secret sits in the middle and knows.”
Robert Frost