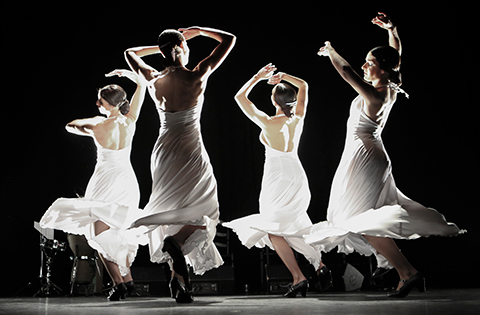 “4 Women 4“  is a show with electrifying performers and musicians dedicated to the changing role of women in society. Carefully choreographed by the emerging flamenco dancer Manuel Ramírez, it offers a historiographical revision of the evolution of Spanish women’s rights from the 19th century until today.

“The real protagonists of this story cannot, of course, be here now to tell their tale, but our artists bring the women’s spirit to the stage, and relate the incessant fight fought to achieve true dignity and full equality” – says the choreographer.

Period costumes, props and the set design immerse the audience in this tale of a bygone era. The ballet includes four female dancers who accompany the choreographer and the principal dancer Maria Tavora, as well as several brilliant musicians and vocalists performing the music and lyrics of Juan Jose Alba’s.

Manuel Ramírez is a solo dancer, choreographer, and artistic director of Manuel Ramírez Flamenco Ballet. He began his Flamenco studies under la Chiqui de Jerez y Antonio el Pipa. He has worked in Palacio Andaluz in Seville, Corral de la Morería, Corral de la Pacheca and the “Candela” in Madrid. He has been the principal dancer alongside Antonio “El Pipa” and Miguel Vargas, performing at the Jerez Festival and the Biennale of Seville. He has also been part of the ballet corps for companies managed by Sara Baras, Estévez-Paños, and Rafael Aguilar with whom he performed in theatres around the world.