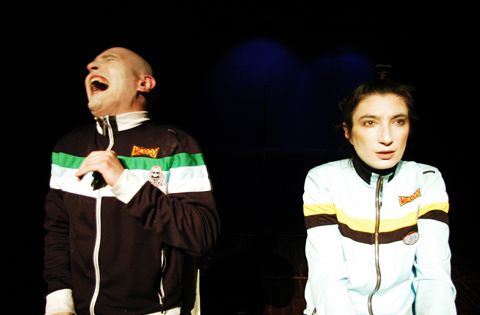 For second time after “Archaeology of Dreaming” (2002) ITF “Varna Summer” produces a theatre performance and meets contemporary European drama with one of the most original Bulgarian theatre makers. The English playwright Sarah Kane (1971 – 1999) remains in the history of contemporary theatre with the extraordinary extremity of her texts and their innovative theatrilicality. Her name is related to shocking facts – her career began with the unusual and cruel play “Blasted” and ended with the concussing “Psychosis 4.48”, which she had written short before she commited suicide. In this text full of poetry and pain, reality and imagination merge in a flow of consciousness between life and death. The famous director David Creig describes it as “a report from a region of the mind that most of us hope never to visit but from which many people cannot escape”. The extremity of the text crosses Dessislava Shpatova’s directing style, whose previous stagings explore love and the painful states it causes, transmitting the text’s trajectory of emotions into actors’ bodies and gestures (“Dangerous liaisons”, “Idiot”, “The Maids”, “The Lover” and others). Her works have been included in numerous selections of the festival and “The Maids” won first prize for best performance at the International Theatre Festival “MASK” 2003 in Hungary .

“One commits suicide if only a little part of one’s self has always existed outside everything. It’s about an initial inadaptivity that might be also unconscious. The person, destined to commit suicide is only by chance on this world. In fact he does not belong anywhere.”
Desislava Shpatova