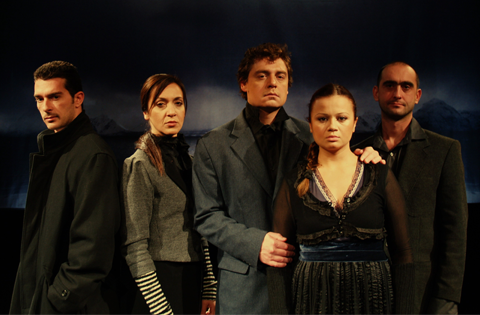 Stoyan Radev belongs to the younger generation of Bulgarian directors. He has directed so far five theatre productions, three of which were nominated for best direction: “Solaris” by Sr. Lem (nominated for the “Askeer” Award, 2000 ); “Salome” after texts by O. Wilde, N. Kazandzakis and Vl. Solovyov (“Askeer 2003) and “The Karamazov Brothers” after F. Dostoevsky (for the “Ikar” Award, 2006). His thorough and detailed treatment of the text and the characters, as well as his pure and minimalist manner of staging have turned into the distinguishing features of his style as director. His style is being even further developed in his latest performance “A Doll’s House”, with which the “Bulgarian Army” Theatre celebrates the 100th anniversary of Henrik Ibsen’s death.

Stoyan Radev takes out several things from the traditional way of staging Ibsen’s renowned play in his performance: he removes all episodic characters, does not recreate in detail the social environment and milieu and does not stress at all on the feministic accents and ideas. The main interest is focused on the interpersonal relations of the main characters and the actors follow the complexity of their psychological motivations. The ascetic set design and the overall concentration on the emotional life makes it a moving performance, which probes deeply into the most intimate and painful relations of living with someone.

“The play tells about – we can surely say that now – a much common family story. We will not try to decipher it. Neither we’ll try to discover that, which may tempt us as hidden depth behind the simple flow of the events taking place… What we will try to do is just to make this text appear. With much trust in it – just as the text has already revealed itself to us. We shall try to live it, without trying to answer its problems or defining it.”
Stoyan Radev