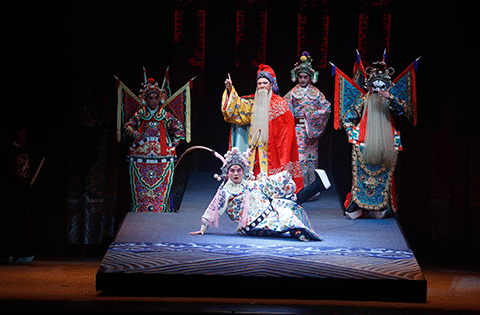 In Chinese with surtitles in Bulgarian and English.

The artistic treasure of the East meets the European theatre tradition with great artistry and expressiveness.

“A Terrified Soul (Macbeth)” intertwines two strong and different theatre traditions. The dramatic qualities of one of the emblematic figures of occidental theatre – Shakespeare, are translated into the stagecraft of one of the emblematic forms of Eastern theatre – the Peking opera. The performance follows the plot of “Macbeth” and interweaves its universal themes of power, morality, fate and free will, setting it in the Spring and Autumn Period (770-476 BC). The Wei State is in danger and General Ziyin is entrusted to defend the country. On his triumphant return the General meets three gods, who tell him three prophecies. The third prophecy says that General Ziyin would soon become the king of the Wei state. Firstly, the General does not believe what they say, however, with the fulfillment of the first two prophecies, he becomes more and more tentative. Consumed by ambition and spurred to action by his wife, Ziyin murders the King and takes the throne for himself. Tormented with guilt and paranoia he soon becomes a tyrannical ruler. The bloodbath and consequent civil war swiftly take Ziyin and his wife into arrogance and madness. Years later, the faithful ministers and generals take revenge on King Ziyin. The defeated Ziyin finally finds peace of mind.

“A Terrified Soul (Macbeth)” tells the story of Shakespeare’s “Macbeth” as a fantastic fairy-tale about the destructive powers of human desire. The suspenseful plot is being transformed into a powerful spectacle. The choreography of stylized gestures and movements is combined with acrobatics and martial arts techniques. The dramatic singing in the highest registers of the human voice are reminiscent of the traditions in Chinese music. The play was written by the young Chinese playwright Sun Qiang, winner of several theatre awards, and it is an homage to the oldest tradition of Peking opera – huiju, which has over 400 years of history. In 2010 Peking opera was inscribed on the Representative List of the Intangible Cultural Heritage of Humanity by UNESCO.

Winner of the Award for best performance at 13th Chinese Theatre Festival.

The guest performance is supported by the Embassy of the People’s Republic of China in Bulgaria and by Anhui performing arts group co. Ltd.