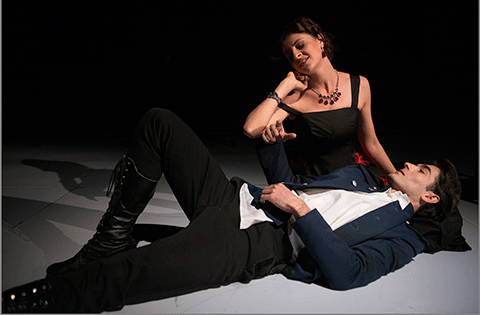 This is the first staging in Bulgaria of Leo Tolstoy’s monumental work Anna Karenina, probably the most read novel in the world and certainly one of the most significant literary classics. The novel masterfully intertwines two layers: the dramatic social changes in 19th-century Russia and the story of the tragic love of Anna, a beautiful aristocratic married to Count Karenin, and the officer Vronsky.

Director Nikolay Polyakov offers his own interpretation placing the character of Anna Karenina in the centre of the stage world. The intimate life of individual personality is transformed into a drama of the free choice against the background of merciless social reality. Two actors impersonate the narrators and introduce spectators to Tolstoy’s novel. As Anna Karenina the charming young actress Mila Bancheva makes one of her most memorable roles.

“…an honest theatrical experience of love as passion, as happiness and as unhappiness.” Veneta Doycheva, Homo Ludens magazine)