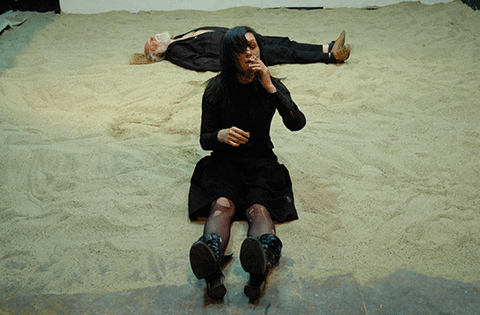 With the atelier “Strindberg in Damascus” TW “Sfumato”’s program “To Damascus”, dedicated to August Strindberg’s drama writings is at its final phase. It is conceptualized together with the writer and playwright Georgi Tenev and is lead by the director Ivan Dobchev. In the atelier take part some of the most interesting and unconventional actors of the Bulgarian theatre stage.

When we speak of “theatre atelier” we imply a broader and bolder understanding of the theatre staging. Of additional creative function of actors. Of the collaborative exploration of dramaturgical territory. Not “a work on a staging”, but “a way to a creative intention”. An activity in which the traditional hierarchy author-director-actor is kept but is charged with a creative responsibility at higher level.

“Strindberg in Damascus” is an atelier at its second stage.

“The immense Strindberg’s play – a chaotic text for theatre, titled “To Damascus” – is rarely staged and a few have read it. It is hard to be adequately understood if we don’t have detailed knowledge of the phenomena in Strindberg’s biography: journeys to the edge of the insanity and maybe beyond it, aberration to occult sciences, family concussions, nightmarish relationships with wives and women outside marriage, friends’ wives, women-phantoms, women-fantasies, women-traitresses.

The paranoid, obsessive episodes in Strindberg’s biography coincide like waves of the peculiar experience, “an interrogation of oneself in front of oneslef”. This is what the experiment in Strindberg’s mega-project “To Damascus” looks like: an attempt to go through a way to revelation, to impossible penance at that – with painful lucidity of the depth of the personal unbelief. An attempt in state of wavering even about the most natural facts – like o.’s own mental state and o’s own reason.

This is the edge where we should be – between extremes, between the affirmative and the denying pathos.

“A memorable Encounter in „The Acts of the Aposltes” is the matrix, the structural philosophy in the attempts in this theatre atelier. An Encounter that puts an end and turns upside down the way to an intention – right down to its denial.”
Ivan Dobchev, Georgi Tenev