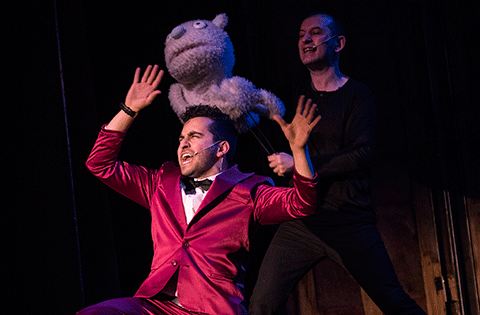 Broadway puppet musical “Avenue Q” with three Tony Awards comes for the first time on Bulgarian stage directed by West Hyler, the American director experienced in this genre who has staged also for the celebrated Cirque de Soleil. “Avenue Q” is a funny performance for adults, which is not ashamed of showing the sensitive topics of the present in an unexpected way. By means of attractive puppets, songs and dances the musical tells the story of Princeton, a college graduate who arrives in New York with his big dreams and a thin bank account. He can afford to rent a place only on Avenue Q. It turns out that what seems a nice poor neighbourhood at first sight is populated with odd creatures of all kinds. They are all struggling to find a job, love and, of course, the ever elusive meaning of life. The young star of Bulgarian pop scene Rafi Bohosyan is cast as Gary Coleman, an ex-celebrity who leases out apartments, and the music is played live by pianist Angel Nikolov.

The musical was shown for the first time on Broadway by Kevin McCollum, Robyn Goodman, Jeffery Seller, Vineyard Theatre and The New Group.

The performance of “Avenue Q” at Sofia Puppet Theatre is licensed by MUSIC THEATRE INTERNATIONAL (Europe).

Sofia Puppet Theatre thanks America for Bulgaria Foundation and Art Office Foundation for their support.

State Puppet Theatre wishes to thank to America for Bulgaria Foundation and Art Office Foundation for the support. The guest-performance is realized in the frame of the Programme for Bulgarian-American exchange in the field of performing arts.