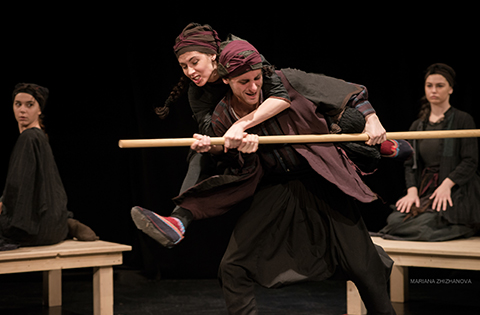 How they suddenly grow rich but comeuppance gets them

The text used as a basis for the performance is inspired by legends told in late 19th century by different old people from the districts of Yambol, Tulcha and Provadia collected and recorded by the trader Balcho Neykov, and then, inserted in his chronicles. The ambition behind these “Collections from People’s Lives” is to tell stories about and of the family of the glorious voivode Stefan Karadja: the Binbelovs. This task is assigned to “Bay Balcho” by a friend of his from the Ministry of Education “for the most patriotic purposes”. But then the manuscript was abandoned for nearly 90 years because the ministry officials considered it not appropriate for publication. Descriptions and plotlines from the memoir manuscript “Vidritsa” by the priest Mincho Minchev from the district of Stara Zagora and from other sources are also interwoven into the text of the performance.