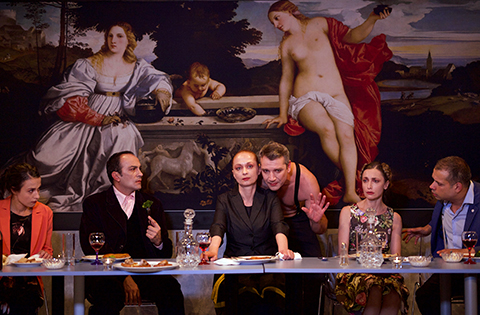 BECAUSE THAT’S HOW MUM LIKES IT

In the aristocratic house of Italian family of Gianturi in Bergamo the numerous family has gathered together to honour the memory of Salvatore, Mrs. Maria’s youngest son. They do so monthly, every first Saturday because that’s how Mrs. Maria likes it. But a mysterious stranger comes to reveal that nobody is what they pass off as being. In front a large canvass, a copy of Titian’s “Sacred and Profane Love” all truths gradually emerge and the tangle of lies starts to unravel. Liliya Abadzhieva intertwines yet again all of the arts into her most recent theatre performance in which she remains true to her style of theatre grotesque.

Zsolt Pozsgai is a Hungarian playwright, stage and film director. In the past 25 years his plays have had almost 100 premieres in Hungary and abroad. He also writes scripts for TV and cinema. Zsolt Pozsgai is popular on the Bulgarian stage. His tragicomedy “Liselotte És A Május” was first staged in Bulgaria fifteen years ago Zsolt Pozsgai has won the Europa Award (Berlin, 1996); Hungary’s Knight’s Cross Order of Merit (2017) and other prizes.