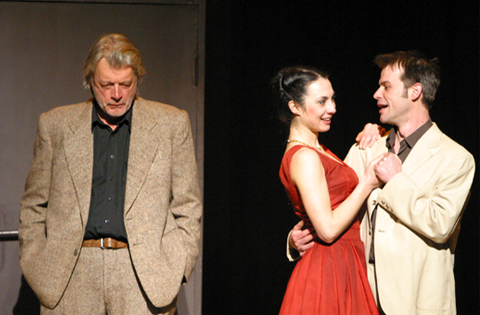 “Boriana” (1932) written by Yordan Yovkov belongs to the realistic movement in Bulgarian modern classic drama. In the house of Zlatil – turned into a classical character of the Miser, the relationships tense extremely. The apple of the discord is his buried treasure that does not let in peace the families of his three sons. In the house enters Boriana – the youngest son’s wife, who turns their values upside down with her love for freedom and joyfulness.

The performance “Boriana” is realized in the frame of “Debuts” program of Drama Theatre “Stoyan Bachvarov” – Varna, and it is first appearance of the young director Dessislava Boeva on professional stage. Her reading goes beyond the everyday life frames of the plot and builds up a dramatic and dynamic narrative in the style of movement theatre.

“Is it possible to use a mathematical principle in finding the formula of happiness? Maybe… But then how can we estimate the curve line for the transformation of longing into an unsatisfactory feeling as a constant? What are the parameters for alienation and loneliness? Is there any scale of fear? How can we protect ourselves from the destructive radius of sin? When do all unknown quantities become equal to despair?
Dessislava Boeva, director