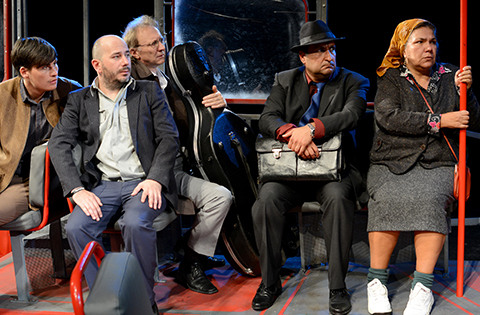 Nine passengers are travelling in a city bus heading downtown when suddenly it deviates from its route. They begin to realize they will never get where they were going. In their fear, panic and terror they turn into an aggressive, faceless mass. “Bus” by Stanislav Stratiev, one of the greatest satirists of Bulgarian drama and literature, was written in 1980, in the then only possible manner to criticize the realities of a totalitarian society: the Aesopian language. Mladen Kiselov immediately staged it at the Theatre of Satire. Director Zdravko Mitkov revisits it to rediscover its powerful topicality. He reads “Bus” as a fatally contemporary farce and thriller twisted in the dark paradoxes of a deformed society. Some of the most popular theatre and TV comedians follow him in his steps.

Stanislav Stratiev is a signature figure for the Theatre of Satire. From 1975 until his death in 2000 he worked there as a playwright, director, art director. He is the theatre’s most staged author with over 15 performances based on his texts.

Zdravko Mitkov graduated as stage director under prof. Nikolay Lyutskanov. He has worked at theatres in Pazardzhik, Pernik, at the Youth Theatre, at the Theatre of Satire (1988-1992) but his longest full-time employment as director was in Sofia Theatre (1992-2009). He has also staged many works at other Bulgarian theatres; he has staged at the USA and in Macedonia. Zdravko Mitkov has won many national awards as director. He is a professor of stage acting and directing at Krastyo Sarafov National Academy of Theatre and Film Arts and in the period 2000 – 2003 he served as its rector. Since 2013 he has been director of “Aleko Konstantinov” Theatre of Satire.