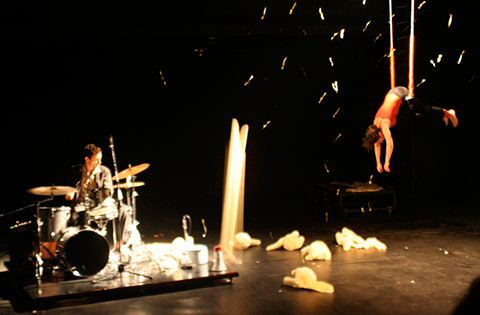 ORGANIZATION BASED ON ACTUAL EVENTS

Ikar 2009 Award for Debut Irina Docheva graduated Acting for Puppet Theatre but her professional realization happens with multigenre independent projects. She has participated in workshops of Rene Polesch, Isabelle Schad, Janel Plummer. She is a co-founder of the artistic Organization Based on Actual Events.
“Butterflies are Jet-Fighters Actually” is her unconditional debut as a theatre maker and actress, realized in collaboration with the musician Alexander Daniel. Unusual and original, the performance is a cocktail of evocative poetry and genuine emotion, tinged with fresh sense of humour. In terms of genre somewhere between live concert and performance art, it is a show for an actress and a drummer. It does not present a concrete narrative and as its subtitle („An Elegant Separation In Nine Steps”) suggests, it is fixed on the moment when love ends. The show examines the feverish consequences and calamities of it. It is a theatrical polyphony of live musical performance, acrobatics and slam.
“Since yesterday I’m supersonic. I kick off at low, turn harshly, I’m too quick for you, bunny. I laugh after you and sing after you, I drink and smoke after you.”
From the play