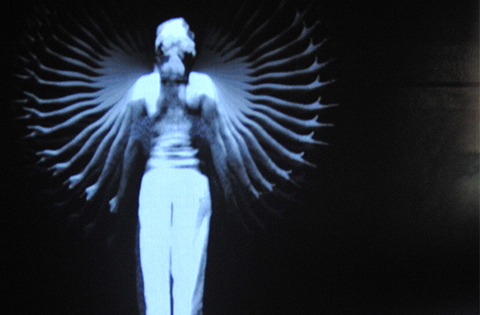 “Handa Gote” means “warrior” in Japanese. This was the name chosen by the independent art company established in Prague in 2005 that fearlessly traverses sound installations, physical, dance and visual theatre mixed with new technologies and live music act. Today it ranks among the most innovative groups on the Czech stage. “Little personal stories:” are often a source of inspiration for the Handa Gote’s performances. In “Clouds” the team turns to the personal archives of one of its members – Veronika Švábová, choreographer and dancer. She explores the story of her own family in the quest for those fateful moments and seemingly banal things that have stuck to memory. Some dark secrets are revealed mirroring the history of the entire 20th century in Czechoslovakia: from the first decades through the two world wars and concentration camps to the communist regime and political court trials. One of them, the notorious Slanski Trial has left its tragic mark on Veronika’s family. Švábová builds a breathtaking documentary panorama of her childhood memories. Through them she tries to reconstruct and tell the story of her ancestors. Tens of old photos and pages from diaries pass on a big projection screen, both terrible and exciting stories and the smell of cake her grandmother used to make reach us. The performance takes its name after the cake: “clouds”. But what do we actually remember and what do we make up of our past? What does the word “family” mean today? Who can still remember grandma’s cake recipes? “Clouds” is a part of the selection of the 25th Prague Festival Mala Inventura 2011 as well as of the prestigious international festival Divadelna Nitra 2012, Slovakia. Performed in Czech with surtitles in Bulgarian and English