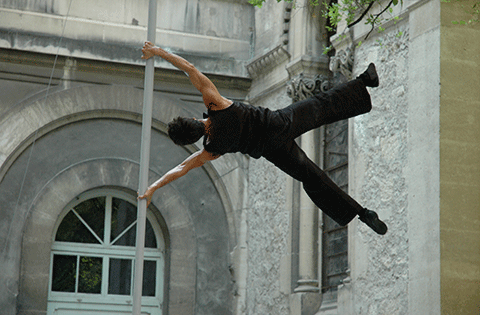 O Ultimo momento is a French-Portuguese company, founded in 2004 by the Portuguese circus artist Joгo Paulo P. Dos Santos and the French musician Guillaume Dutrieux. Two Portuguese artists, Joгo Paulo P. Dos Santos, a Chinese pole acrobat, and Rui Horta, choreographer, mix their experiences and influences to create a singular show named “Contigo” in which they find their own unique language. The show deals with their different perceptions of their bodies and objects. On an empty scene, with some objects, a Chinese pole and above all a body, Joao expresses his anger and his masterly skills between the sky and the earth, but also his exhaustion and his loneliness. „Emilio Zapatero” award for circus of Festival Internacional Teatro y Artes de Calle in Valladolid 2009 – Joao Paulo Dos Santos.