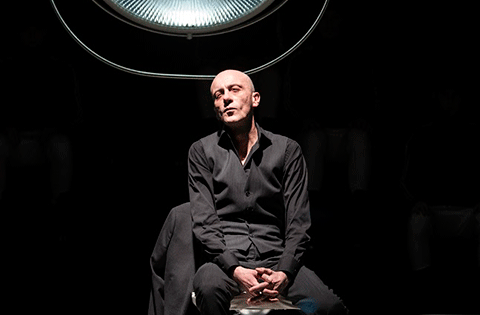 Dr. Martin Dysart is a psychiatrist facing a difficult case. His patient turns out to be 17-year-old Alan Strang, who blinded six stallions he had been taking care of in an especially cruel manner. The plot unfolds as a detective story in which the psychiatrist is trying to understand the reasons behind the deed of the young man who had isolated himself from the world around him. This case puts into question the psychiatrist’s own beliefs in the meaning and purpose of his profession: what world is he preparing and treating the young men who come to him for help for?

“Equus” is among the most awarded, staged and filmed plays of Peter Shaffer who is one of the landmark authors of English-language drama in the last decades of 20th century. He is also known for the famous drama Amadeus (1979) used by Miloš Forman for his celebrated film of the same name that earned 8 Academy Awards. The complex psychological roles of Dr. Dysart and Alan have attracted actors of world renown such as Anthony Hopkins, Richard Burton, Daniel Radcliffe and others. Thirty-six years after Grisha Ostrovski’s performance and again on the stage of the Youth Theatre young director Stayko Murdzhev makes a new poetic and modern interpretation of “Equus”.

Askeer 2017 Award Nomination for best actress in a supporting role (Stanka Kalcheva), for music, for best director and for best performance