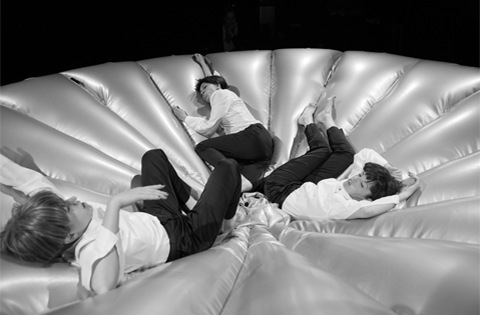 With the special dramaturgical collaboration of Svetozar Georgiev (ghostdog)

The are faceless, inert, amorphous. They slide on the surface of matter, take delight in it, devour it and it devours them. They play with each other until the game gets dangerous: the border between infantile pleasure and predatory aggression is quite thin. They chew, incessantly, more and more greedily; they spit and chew again. Is there a way out of the vicious circle of consumption?

A performance by one of the most interesting artists in contemporary dance and performance in Bulgaria, directed by the unpredictable Anna Dankova.

The performance is supported by the Programme Culture of Sofia Municipality for 2016 and by the Ministry of Culture.

With the support of „Alpi” Ltd. and „LandMark”Ltd