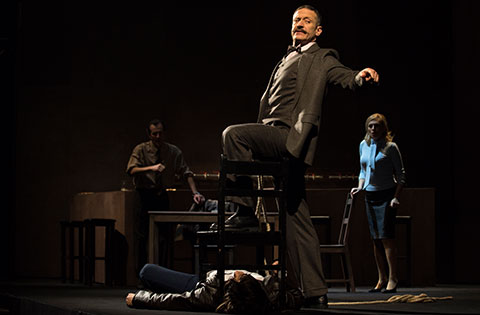 “Hangmen” (2015) is Martin McDonagh’s long expected comeback to theatre stage after a series of successes in cinema. It reaffirms his place among the leading authors of new British drama and won him the Lawrence Olivier Award. The intricate criminal black comedy carries us back to 1960s’ England. In a small pub in the Northern British town of Oldham Harry Wade is a local celebrity. But what could the England’s second-best hangman be doing on the day in 1965 when the country abolished the death penalty by hanging? Questions concerning justice, morality and impossibility of steady and unequivocal solutions are raised with absurdist humour and in paradoxical situations. A topical and stylish theatrical thriller by director Stoyan Radev with the company of actors of Theatre Sofia and starring guest actor Deyan Donkov in the leading role.